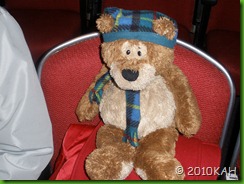 I didn’t know how much I missed going to the theater to watch live performances until I went today.  It’s been a long time since I went the last time.  I had a really good seat again, too. 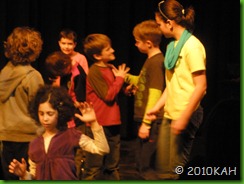 Today, kids in third, fourth, and fifth grade performed scenes from THE LIGHTENING THIEF.  That’s the book by Rick Riordan.  Have you read it?

The story is about kids who are part human and part Greek gods.  I haven’t read the book but my reading and writing teacher, Kathleen, has a student who read the book so she learned all about the story from her student and then Kathleen shared with me. 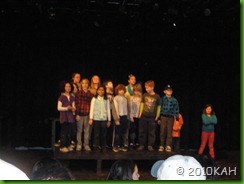 The cast of kids in the show chose their favorite chapters in the book.  Then they chose the most important parts and wrote a two page script.  They also did their own staging.

That means they decided where they needed to be on the stage when they read their lines. It sounds like a lot of hard work, and I bet it was.  But they did a super job!

Tomorrow I’m going to the theater again to watch SWEENEY TODD.  The older kids are performing in that show.

If you want to act on stage you should ask your parents to visit the Seattle Public Theater website.  They have classes for kids my age and older.   It’s a great way to get experience in the theater!  Here’s the link:  http://seattlepublictheater.org/education-programs.htm

Check back tomorrow and I’ll tell you all about SWEENEY TODD.

Posted by Sleepy Bear and Moosey-Moose Stories at 6:49 PM No comments:

I’m so happy Grandpa arrived when he did.  Yesterday, he helped me write my letter to Santa Claus.  I asked for something for my friend, Moosey-Moose. He’s been feeling melancholy because he does not have any family nearby.  And, he really wants to go someplace exciting but he does not know where to go.  Maybe Santa will bring him something to cheer him up. 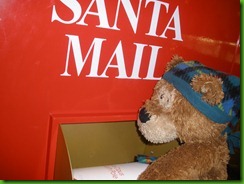 Well, I dropped my letter into the mail box.  I hope Santa gets it in time.

I’ll let you know what happens.

Posted by Sleepy Bear and Moosey-Moose Stories at 4:45 PM No comments:

I waited a very long time for Grandpa Sleepy Bear to arrive today on the Amtrak train. 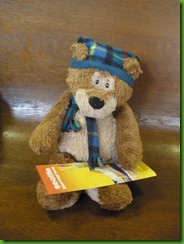 I was all ready with my sightseeing brochure.  But waiting made me sleepy. 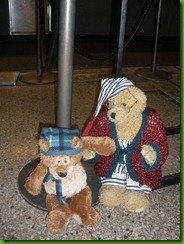 I decided to walk around so I would not fall asleep.  I was on my way back to the bench to curl up and nap when guess who snuck up behind me?

I quickly woke up.

Check back tomorrow when I tell you about some of the fun things we did today.

Posted by Sleepy Bear and Moosey-Moose Stories at 8:11 PM No comments:

Sleepy Bear Has a Visitor! 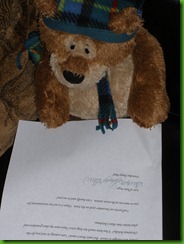 I got a letter in the mail today.  It’s from my grandpa!  I have not heard from him in a very long time.  I thought maybe he had forgotten about me.

But he has some good news. It says his rheumatoid arthritis is better.  It also says he’s coming to visit me for Christmas!!  And he arrives by train!!!  On December 22nd!!!!

Grandpa Sleepy Bear also sent a picture of himself.  He looks just like I remember him in my mind. 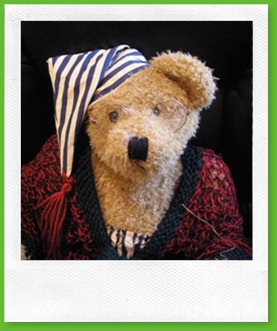 I’m so super excited!!! I’d better go to the store and buy extra cocoa and whippy cream.  Oh, and I think I’ll go to the library and get lots of holiday books to read with my grandpa.  I can’t wait!

Posted by Sleepy Bear and Moosey-Moose Stories at 1:21 PM No comments:

SLEEPY BEAR GOES TO THE THEATER!

I’m so excited!  I got to go to The Bathhouse Theater in Green Lake to see THE BEST CHRISTMAS PAGEANT EVER.  It was a nighttime performance, too!  I got to sit in the front row, super close to the actors.  I felt very grown up. 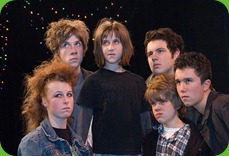 Remember when I told you how mean the Herdman kids are in the book?  Well, guess what?  They are even meaner in person.  I’m glad they are only characters in a play and not that way in real life.

Most of the story from the book was the same as the story on stage.  But some parts were different. 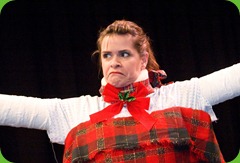 In the book, Mrs. Armstrong broke her leg. But in the play, she broke both her arms and both her legs!  She was wearing roller skates and she had two helpers push her on stage.  She also talked funny.  My teacher,

Kathleen, told me she had an accent.  I liked her costume, too.  She looked like a big Christmas present. 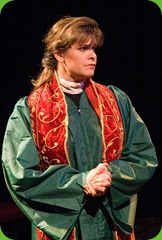 Another part that was different was in the book there was a reverend for the leader of the church.  A reverend is a man.  In the play, it was a lady. She was called the minister.  Oh, and she was played by the same person who played Mrs. Armstrong.  I bet that’s tricky to do.  I hope she reads my blog.  If she does, maybe she can tell me what it is like to play two different characters in the same play.  I bet that takes lots of practice!  I would be afraid I might say the wrong lines. 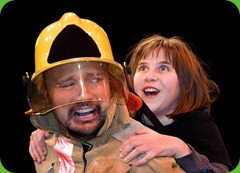 This was a funny part.  The adults thought the Herdman kids started a fire in the church so they called the fire department. Except, it wasn’t the Herdmans who started the fire, it was the ladies baking in the church kitchen.  They burned their applesauce cake!  Gladys hopped onto the back of a fireman.  That really surprised him.  Or, maybe he was scared because he knew Gladys was a Herdman! 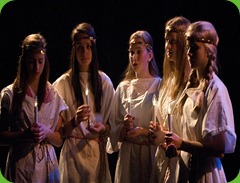 One of my favorite parts was when the choir angels started to sing.  My fur was tingly and it was sticking straight out.  Kathleen told me she had goose bumps.  I think that’s what I had, too.  She also told me it meant that the actors were doing a super great job at singing and being angels in a choir.  I agree. I almost forgot I was sitting in a theater!  I wonder if they take singing lessons. 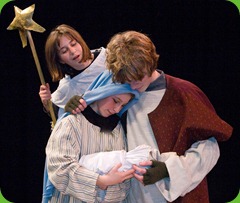 This was another really good part. That’s Gladys holding the star and Imogene and Ralph Herdman!  Wow!  The real people did a super job to be Herdman kids and actors in another play.  That’s like a play inside of a play.  Good thing the cast has a super good director, Shana Bestock, to help them.

Kathleen told me that sometimes people get too busy and they forget that Christmas is really supposed to be about caring and giving and thinking about others.  She also told me that it doesn’t matter if you believe in Christmas or another holiday.  It’s the tradition and spending time with family and friends and caring about others that really matters.  That’s what happened in the story.  The Herdman kids really weren’t that bad.  They just needed people to care about them and give them a chance and help them learn new things and believe in them.

My fur got all tingly again.  Must be those goose bumps!

I could go on and on about how super great the performance was.  But, I think you should go see it for yourself.  Here’s the link to the Seattle Public Theater:  http://seattlepublictheater.org  You can find out all the days and times when you can see the show.

I hope the cast members write back to me and tell me more about what it is like to be in a play on stage.

Posted by Sleepy Bear and Moosey-Moose Stories at 10:57 AM No comments:

I hope you like the book I chose.  I like it but I think the kids are horrible!  They aren’t very nice at all.  I’m glad they don’t live near me. 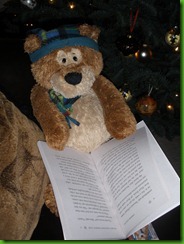 I have to read a lot this week.  On Thursday I’m going to The Bathhouse Theater in Green Lake to watch the kids perform this story on stage.

I wonder how the book and the live performance will be the same and how it will be different.

Maybe I’ll see you there!

Posted by Sleepy Bear and Moosey-Moose Stories at 8:45 PM No comments: 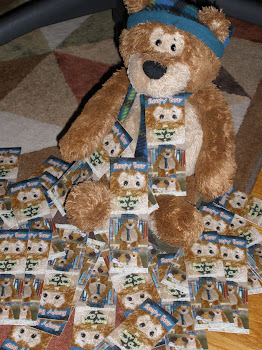 Search My Blog for My Book Reviews